In the summer of 1964, I was horrified watching the television news as the story of the brutal murder of 3 SNCC—Student Non-Violent Coordinating Committee—civil rights workers, James Chaney, Andrew Goodman and Michael Schwerner unfolded in Mississippi.

They were taken and executed by the Ku Klux Klan, with the help of local law enforcement officers and the collusion of the Government of Mississippi.

Deeply moved, I drove south the following summer of 1965 from my home in Toronto to volunteer as a civil rights worker, with SNCC, doing voter registration in the Delta. In the course of my work I was jailed, and later assaulted by a member of the KKK, Byron (“Delay”) De La Beckwith, the son of the man later convicted of murdering Medgar Evers, then NAACP Field Secretary for Mississippi.

In 2006, I began returning to Mississippi to see how things had changed, and not changed; to make the film, Prom Night in Mississippi; and to try to find Delay De La Beckwith, and explore if personal reconciliation between us was possible.

My parents’ main teaching was the Golden Rule: “Do unto others as you’d have them do unto you.” I was named after Paul Robeson, a great artist and an early pioneer in the American civil rights movement, and I grew up reading and admiring Mahatma Gandhi and his world-changing philosophy of non-violence.

It was these foundations, and my experiences in Mississippi in 1965 that motivated me to engage Delay in an ongoing and non-violent communication, on film, spanning 5 years and 5 trips to Mississippi.

My goal was neither to blame him, nor to judge him. And it was certainly not to change him. That only comes from within each of us. My goal was to explore how Delay and I each think and feel, in connecting with each other after all these years. And my goal is to share this journey through The Last White Knight — with the hope that it plays a small part in the greater evolution of consciousness and heart. 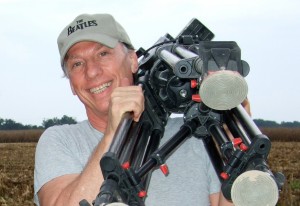